For the future developement of the class, the International Vaurien Class Association is testing a mainsail from mylar laminate. More information and a questionaire to give your opinion can be found here. 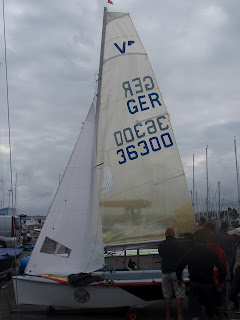 Finally they made it. They almost made it in 2009, but suffering a DSQ in the last race, they were 2nd in 2010 ... but finally, with an almost flawless performance, the 2012 Vaurien World Championship goes to Jaime and Alfonso Leiros from Spain. With only one race win, but a strong collection of six 2nds, they secured the Championship even before the last race was cancelled due to lack of wind. 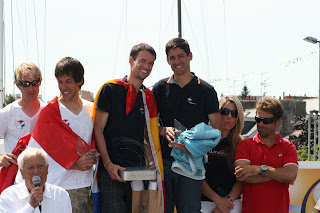 The Dutch strong wind specialists Roelof and Jelmer Kuipers made a strong start, collecting three out of three bullets in the stormy conditions of the first day, which saw many of the fleet struggeling, with many capsizes and breakages. But with the wind decreasing on the next days, the had to concede with second overall.
Long-time Vaurienists and former World Champions (1999, 2000, 2007) Javier Serano and Rosa Foruria (ESP) bringing up the third.

The Vaurien Junior Wolrd Championship was won by the 2010 World Champions Olmo Cerri and Eduardo Meini (ITA) for a 4th (and last) time in a row, followed by fellow Italians Ettore Botticini and Sebastiano Stipa and the Dutch team of Jelmer Yntema and Jorrit Bonnema. 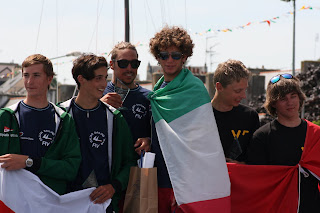 As last year, the women competition was won by Lucia Llopiz Dominguez and Laura Llopiz Castedo, while the masters title (Total age >65, Helm > 40 , Crew > 19) was won by Francesco Zampacavallio / Frabrizi. 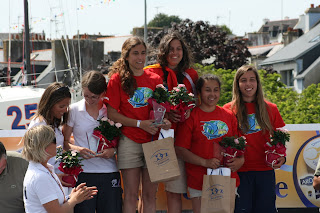 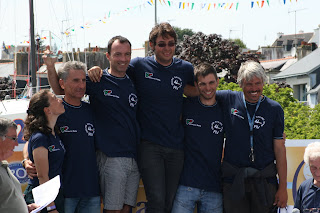 The overall results can be found here.

Again, many pictures were taken by Jaap Röfekamp, who is turning into something like an official photographer.

Thanks to AS Vaurien France for the organization of this World Championship, and see you next year in Sanxenxo, Spain.
Eingestellt von Pidry um 10:01

The countdown is on, only two more days until the 51st Vaurien World Championship starts in Douarnenez, France. 66 teams, mostly from Europe, with exotics from Uruguay (URU) and Netherlands Antilles (AHO) have signed up for the World Championship, that also marks the 60th anniversary of the Class.

Reigning world champions Miroslav and Maros Baran (SVK) are returning to defend their title, won last year at Lake Dümmer, Germany. Their predecessors Olmo Cerri and Edoardo Meini (ITA) will are prepared to give a good fight, preferring to sail on the sea as opposed to the lakes, that hosted the last two World Championships.

Also several young Dutch teams are on site in Douarnenez since last week, and will try to get a shot at at least the Junior World Championship.


Full details can be found on the event website.
Eingestellt von Pidry um 10:04