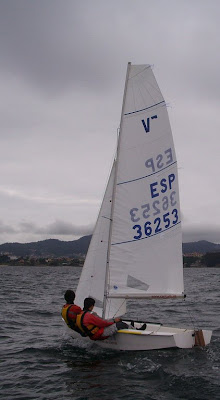 The hard-chined construction gives the Vaurien very stable sailing characteristics so that it can be easily controlled even by beginners. An all-up weight of only 95 kg makes handling the Vaurien a simple task, both while sailing and ashore. Therefore it is perfectly suited for educational purposes. But to sail a Vaurien at optimum speed requires great skill at the helm and good teamwork.

Since its early days the Vaurien was regularly updated to the state-of-the-art while ensuring that all innovation could also be adapted in existing boats. The most recent change is the new sail plan which was introduced in 2008. A modern main sail with a square 'fat-head' top, a slightly bigger jib and a bigger spinnaker lets the Vaurien accelerate faster, especially in light winds, without creating greater heeling forces. As before, the Vaurien can still be sailed without problems in strong winds.

The typical Vaurien crew is nearly impossible to describe. Often seen are adults with teens, beginners with experienced, youth teams, women crews or mixed crews. The oldest Vaurien sailor of the last season was above 70 while the youngest was only 5 years old. The ideal crew weight ranges from 100 kg up to 150 kg and therefore covers more or less every possible combination of sailors. The Vaurien is simply the dinghy for everyone.

Uncountable regattas gives you the chance to measure your abilities with other and enhance them. From the easy-to-reach regatta in your region or in adjoining countries, many open national championships, the Europa-Cup up to the annually organized World Championship there are enough possibilities that everybody, the beginner and the ambitious top-sailor, will find the competition he seeks. And who knows where that will lead you?

Many outstanding sailor have sailed the Vaurien:

Pierre Fehlmann - a.o. Winner of the Whitbread Round the World Race