The Vaurien is fifty years old already! How did that happen?
For any sailing class, fifty is really quite a respectable age, an age at which it might take itself seriously. But does the Vaurien really want to act her age and be serious? You may find her somewhat outdated, overly simple, too rustic, too highly principled but those who knew her in her early years would tell you a quite different story. 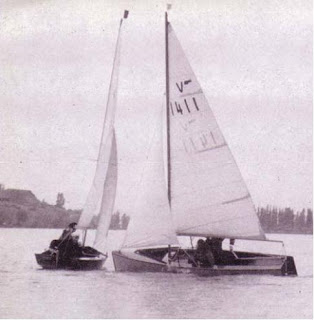 Born in 1951, launched at the 1952 Paris Boat Show, the Vaurien was a revolutionary yacht: a shameless little rascal that made waves among the yachting fraternity. It must be said that it was a pretty strange idea to design a boat available to all those youngsters who, thanks to the Centre nautique des Glenan, were beginning to spend their holidays on islands around the French coast, acquiring a taste for sailing and the sea, a boat that would enable them to buy their very own boat. What a strange idea indeed! Why not continue to sail as a crewmember on dad's yacht? And how would dad find a crew if the kids all went off to sail on their own? That would be a problem! And then not all the dads had boats, so the sea and sailing was not really something that was open to those kids. It was J.J. Herbulot's wish to see as many as possible share his love of sailing. Something had to be done so they could all set sail. What was needed was something light, easy to handle, instructive and, above all, inexpensive.The material - plywood and glue - withstood the rigours of the boiling kettle and exposure to the elements on the balcony.

The prototype was built at Philippe Viannay's, but had to be carried out on its side because the door was too narrow. Named after a dog that Philippe had been very fond of, the No 0 sailed all summer of 1952 at Les Glénan, with a Firefly sail and an Argonaute jib. At her first Boat Show in 1952, on the banks of the Seine, the Vaurien No 1 was priced at FRF 55000, the equivalent in today's purchasing power of FRF 6000. It was only one quarter the cost of the cheapest dinghy, the 9 m² Sharpie (a solo yacht), and the price of two bicycles. She was a real livewire and she generated plenty of talk. The amazing price was made possible by her simplicity and rationality: the hull was just 4.08 metres long foe the best use of the sheets of ply, the flanks and flat bottom lent themselves to series production, the fittings were Spartan. The Costantini shipyard in La Trinite sur Mer started up production of 200 units, sailmaker Le Rose in Concarneau began series production of the sails, with pre-pared cloths and boltropes sewn by machine rather than by hand. For all of us it was a first: no one had ever before thought it possible to produce 200 boats of l the same model! 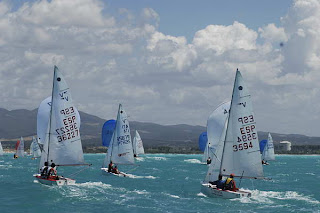 Was the Vaurien just plain crazy? Not at all. At the Cercle de la Voile de Paris, in Meulan, the Vaurien was available on the Seine in the winters of 1952-53 and 1953-54, for anyone who wanted to try her out. And all those who did try her became unconditional fans. In September 1953, with already some two hundred owners, the AsVaurien was created. Orders poured in: more boat builders were needed. Martin, Besnard, Bonnin, Didier. On 1 January 1954, there were 222 Vauriens. By 15 August, there were 400 in France and the virus was beginning to spread. Belgium was the first to be affected, then the Vaurien set sail to conquer the four corners of the globe, winning over all those who would never have been able to sail without her, or at least would have had to wait many years before doing so. 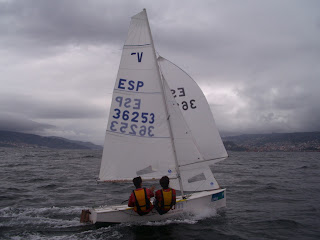 Today, all the top yachtsmen remember having started in a Vaurien. Today, she is found in all sorts of unexpected places, peppered across the globe, as evidenced by the annual World Championships that bring together about one hundred boats from 10 or 12 countries, and by the mail that comes to us from the most distant reaches of the world. Despite considerable envy, her rivals have never got the better of her. It should be said that right from the start she had some hefty friends: the Centre nautique des Glénan, the Touring Club de France, and the magazine Les Cahiers du Yachting. And that she always met with enthusiasm and devotion in her national associations, then in the International Committee, the CIV, set up to coordinate national efforts and which has benefited from the unstinting commitment of its chairmen and members.

The darling of J.J. Herbulot, the Vaurien is still today one of the most inexpensive ways of putting people to water, and racing truly exciting regattas. The fact is that revolutionary children always attract a lot of love, and the Vaurien, it must be said, was a revolution!